Governor ‘Seyi Makinde of Oyo State, on Monday, kickstarted the distribution of over 2.7 Million free exercise books to all students in public secondary schools in Oyo State, stating that the move is part of efforts to improve the quality of education and give opportunities to students from all backgrounds in the State.

The Governor, while making a symbolic presentation of the free exercise books to some students from selected secondary schools in the State, at the Executive Chamber of the Governor’s Office, Agodi, Ibadan, said that his administration will continue to pay more attention and put in more resources to the education sector.

A statement by the Chief Press Secretary to the Governor, Mr. Taiwo Adisa, indicated that the Government has approved the payment of school grants to public schools in the State.

He added that his administration will always welcome constructive criticism that can assist the Government of the day.

On the school grants, the Governor maintained that his Government would continue to invest in education, stating that renovation of public schools and distribution of school furniture to students across the schools in the State would be made through the direct resources of the State.

He urged all Stakeholders to work with the Government and not play politics with the future of our children, saying: “We believe, as a Government, that if we get it right at the primary and secondary school levels, if we have sound products coming out of our secondary schools, we would have been 70 per cent on point in terms of what we want to achieve in education.

“In the days ahead, we are taking the issue of infrastructure in our schools seriously. We will be having new chairs and tables. We will continue to renovate the schools through the direct resources of the State.

“I will use this opportunity to call on all stakeholders to work with the Government and not play politics with the future of our children. If we are doing certain things right, tell us. And if we are falling short in certain areas, tell us also because this is our future and we should all work together to ensure that the future is really secure and guaranteed.”

The Governor also reiterated that in Oyo State there is a freedom to practise religion and that no one can divide the people of the State through religion.

“Last week, I was reading in a place that in Oyo State, we don’t allow students to wear Hijab but I can see some students here wearing their Hijab and no one is harassing them. For us here, we give freedom to practice religion. Nobody can divide us through religion,” he said.

Earlier, the Commissioner for Education, Science and Technology, Barr. Olasunkanmi Olaleye, said that the distribution of free exercise books to students was to promote Education in the State.

He added that the Government is giving out more than 2.7 million exercise books to all secondary schools in Oyo State for the year 2021. 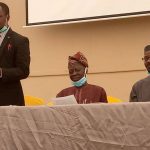 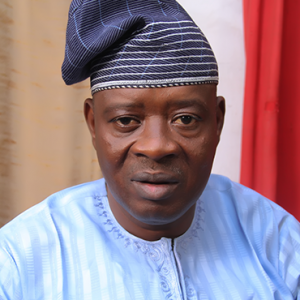